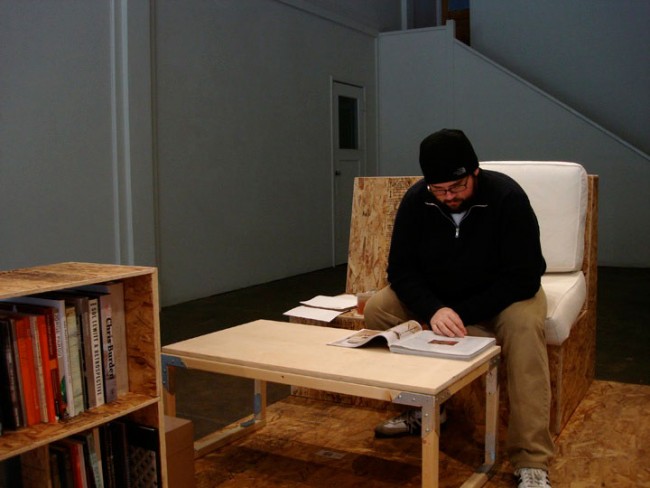 Quinn Gomez-Heitzeberg, “I Have Legitimate Concerns” installation and performance.

Corridor 2122 was not founded with an idealistic mission in mind, but rather out of necessity. The artists of I.C.C.A. Studios needed to relocate after the building we were renting on H Street was purchased for development. Finding a building that would provide studio space for the artists involved was always the primary goal.

Corridor was a step up from the scrappy origins of the I.C.C.A. Even though it was located in a neighborhood populated primarily by thrift stores, the building was in good repair and provided a storefront with the possibility of foot traffic. The decision to use almost a third of the building’s space for a gallery came relatively easily. Once we had the space available to make art, we wanted a place to show it as well.

Corridor’s focus on providing exhibition opportunities for its members is not new or unique in Fresno. Gallery 25, Spectrum, and Fig Tree galleries have existed for decades as cooperatively run spaces. The abundance of artist run spaces in Fresno is not surprising, given the lack of commercial galleries and the scarcity of institutional opportunities for local artists to exhibit.

When I left Fresno for Los Angeles, a city with no shortage of commercial art ventures, I found that there was a boom in artist run spaces there as well. Elephant, the space where I am currently a co-director, was founded by artists who finished their graduate degrees just as the 2008 financial crisis took hold and a successful career in the arts became that much more difficult to attain. Spaces opened in storefronts, houses, garages, and studios as artists decided to create their own opportunities to show the work they were excited about.

In the intervening years, some of these spaces have moved beyond their origins, engaging in residencies at museums, being included in biennial exhibitions, or transitioning into commercial ventures. More important than these “success” stories perhaps is the community of spaces that has coalesced in Los Angeles. There is now a network of galleries characterized by experimentation and risk taking — spaces that actively support one another, where you go to see innovative and interesting contemporary art.

For ten years, Corridor has existed as a supportive community of artists. It has been a hub for contemporary art in Fresno, a place where people can be challenged by new ideas of what art can and should be. I hope that a spirit of experimentation, excitement and passion carries Corridor into its next ten years.