Before Corridor, as remembered by Stephen Dent:

I was asked to write out the history of how Corridor came to be, and what that early vision was for the space. What follows, in no way claims to be the “official version”, but my version – influenced by ten years of separation from the facts. 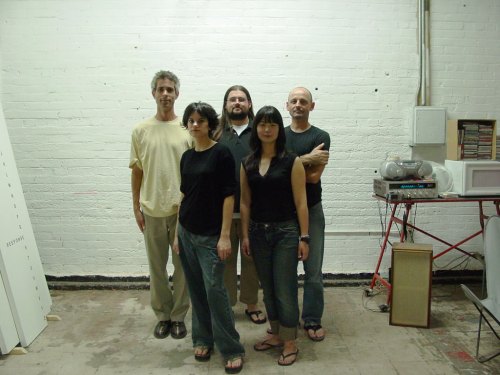 In 2002-3 a group of us, all artists and museum professionals, came together to share studio space at the old Army Induction Building on H Street in downtown Fresno – there was myself, Aimee Dent, Quinn Gomez-Heitzeberg, Edward Lund, Yumi Kinoshita, and Ronald Dzerigian. Because of the building’s history, we chose the name “Induction Center for Contemporary Art“ (ICCA) for our group and the series of studios that we shared. At that time, we were all members of other artist co-operatives, either Fig Tree Gallery or Gallery 25, and employees of either the Fresno Art Museum or the Fresno Metropolitan Museum. As the ICCA, we participated in ArtHop and held a handful of events, but the ICCA experiment was relatively short lived, as big changes were in store for the Cultural Arts District of downtown Fresno.

In 2004 we were evicted. Properties were being bought and sold, and redevelopment was underway in our neighborhood. The search for a new home had begun when Aimee and I received a phone call from Robert Ogata, letting us know that there was a property for lease across the street from his studio at The Busbarn. After viewing the space, Aimee and I made some phone calls to “get the band back together”. Ed, Quinn, and Yumi were quick to join and help in the search for other artists with similar sensibilities. William Raines signed on and then Steve Dzerigian and Sally Stallings agreed to join us. 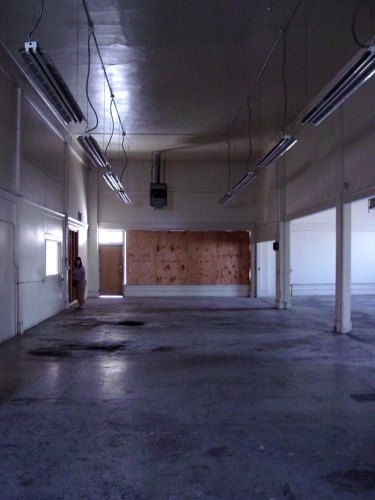 The warehouse area before the construction of the studios.

The primary concern for all of us was to obtain studio/work space – we saw the exhibition space/gallery as just bonus. There were many early discussions centered around the fact that none of us wanted to enter into the “commercial gallery business” – we did not want to be gallery owners – but were primarily concerned with the development of our own artwork and working in our studios. Thus, we came to some basic understandings early on: 1)the exhibition space/gallery would function as an extension of the studios – a place where we could work out ideas and experiment 2)we wanted a membership which represented the variety of contemporary art making practices (drawing, painting, sculpture, installation, photography – traditional and conceptual practices) – we believed this would stimulate discussion and the cross pollination of ideas in our work 3)the exhibition space/gallery would focus on contemporary art with the belief that art can be just as much about ideas, not just the visual object – this would be something slightly new and unique in Fresno, but a philosophy easily found in the more urban areas of the state.

The name “Corridor” was generated from the phrase: “the highway 99 corridor” which is commonly used as a descriptor of our San Joaquin Valley, implying that Fresno is a place many pass through but few see as a destination. We had an idea that by focussing on contemporary art we were that link between the contemporary art venues of the larger urban areas of Northern and Southern California.

All of this sounded great, but in its current state the space was far from being able to function within this early vision – therefore the next step was renovation. At roughly 5000sq ft., the space had a warehouse and storefront/office. We divided up the square footage of the warehouse equally between the partners and everyone began constructing their own studios – coming together for some of the larger tasks. Once the work spaces were “workable”, the gallery renovation followed and was a group effort.

With great financial and physical investment, it took us 6 months of continuous labor to get the entire space workable and presentable, but it was tremendously exciting – giving up our evenings and weekends to build our own space and create something new. We took possession of the space in April 20004 and opened in October with our first exhibition – a group show of the founding partners. In those early couple of years, we continued to renovate areas of the space, creating more studios. In 2006 Jim Heitzeberg and Thomas Evans Howell joined our partnership, taking over the upstairs loft of the gallery.

Shortly after our opening, the thrift store with which we shared the building closed down and Fig Tree Gallery, Richard Silva and Gallery 25 moved in – as irony would have it, they were all being forced to relocate from the “Cultural Arts District” as well. 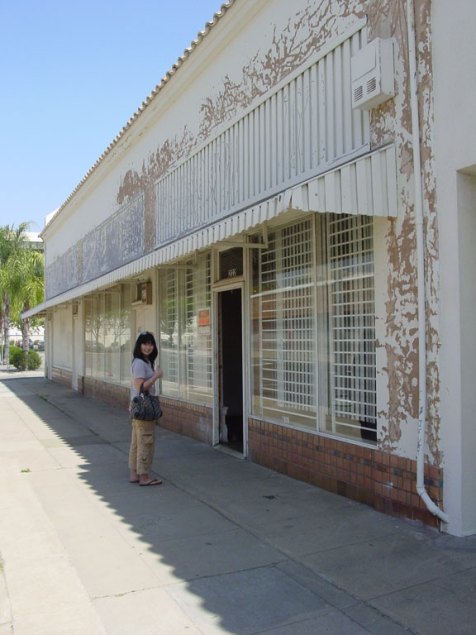 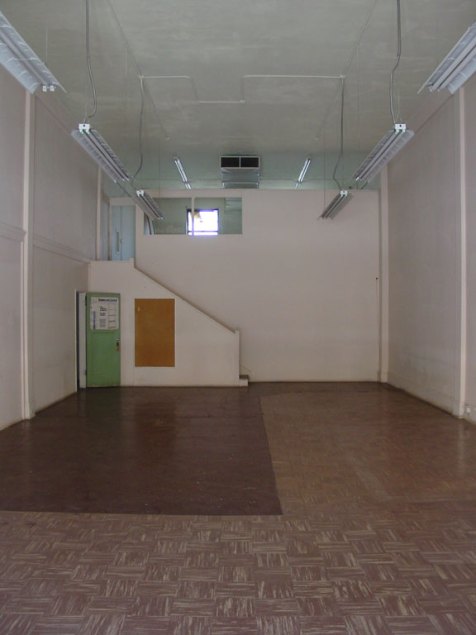 the office space before exhibition space 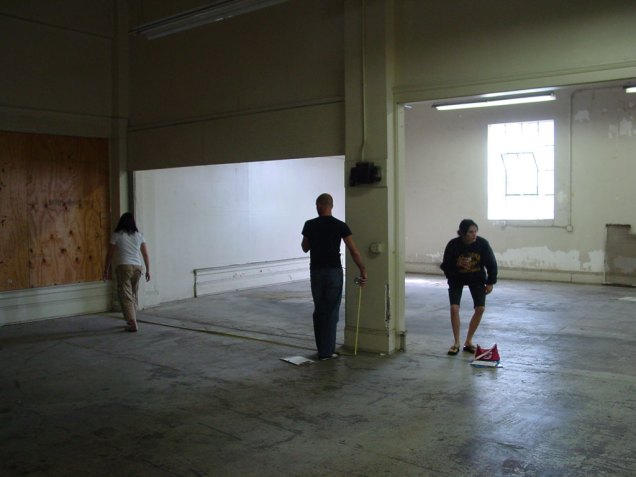 dividing up the space 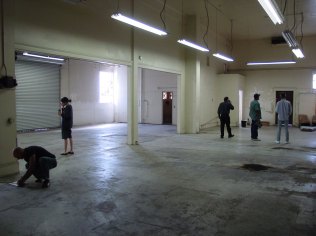 the open warehouse before construction of the studios 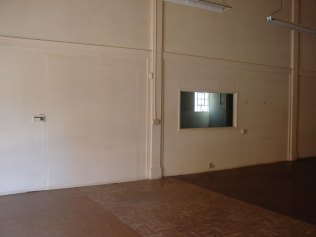 looking from the office (gallery) into the warehouse (studios) 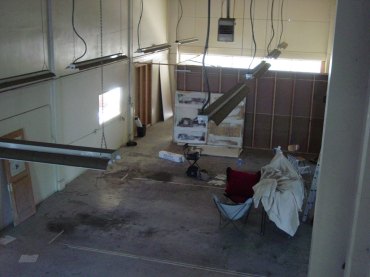 everyone marking their territory 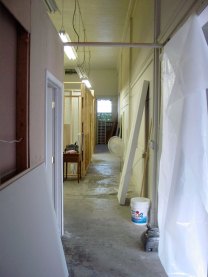 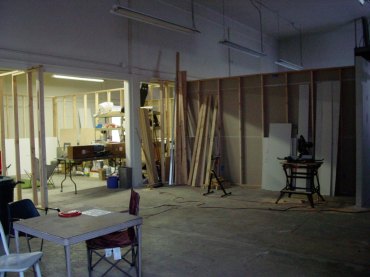 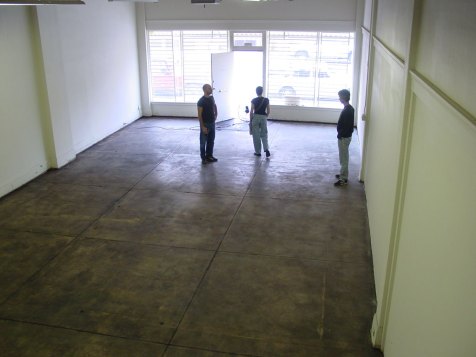 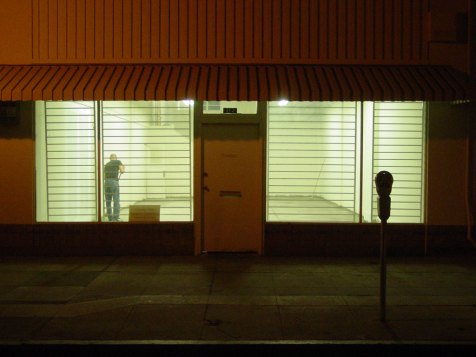